The maps in this collection were created by Alistair Short, the FSL cluster coordinator here in Juba. Alistair has a background in geography and shares these maps with his FSLCC reports, which are also posted on the FSLC website. Since these maps are generally much reduced and embedded in word documents, Alistair graciously invited me to his office to photograph them.

Prior to each FSLCC field visit, Alistair traces county boundaries onto a large sheet of paper and adds a few lines to indicate major features of the landscape (rivers, roads, &c.). He then spends a few hours in, say, Bor or Kapoeta, drawing these maps together with whoever he can round up to join him. They provide a useful way of quickly summarizing a lot of information, and are made by asking a series of questions: what do people produce in this area? How do they get materials, where do they take things after they have been produced? Has this process been disrupted in recent months? How do people move around the region? Why? And so forth, wherever the discussion leads.

I really like these maps because I am interested in how we know what we know about South Sudan. Participants in any knowledge system draw the materials of knowledge production from all sorts of sources, from direct observation, conversations with others, and written reports. These observations and discussions frequently take us, (or take someone), on all sorts of different journeys. But finished maps generally eliminate the practices and routes that have contributed to their production. Consider Integrated Food Security Phase Classification (or IPC) maps, with their color-coded counties and population tables. These are produced by a several-days' process of consensus building among various experts, of one sort or another, who work to reach agreement about the reliability of various sources of information and what they mean. IPC maps themselves present phase classifications in a manner that appears to be a simple calculation based on the most severe phase experienced by at least 20% of the population. The deliberative processes (disputes, horse-trading, uncertainties) that have produced the classifications are erased entirely. While, admittedly, Alistair's maps erase much of the process of their production, those traces that remain provide a continual reminder of how they were made. 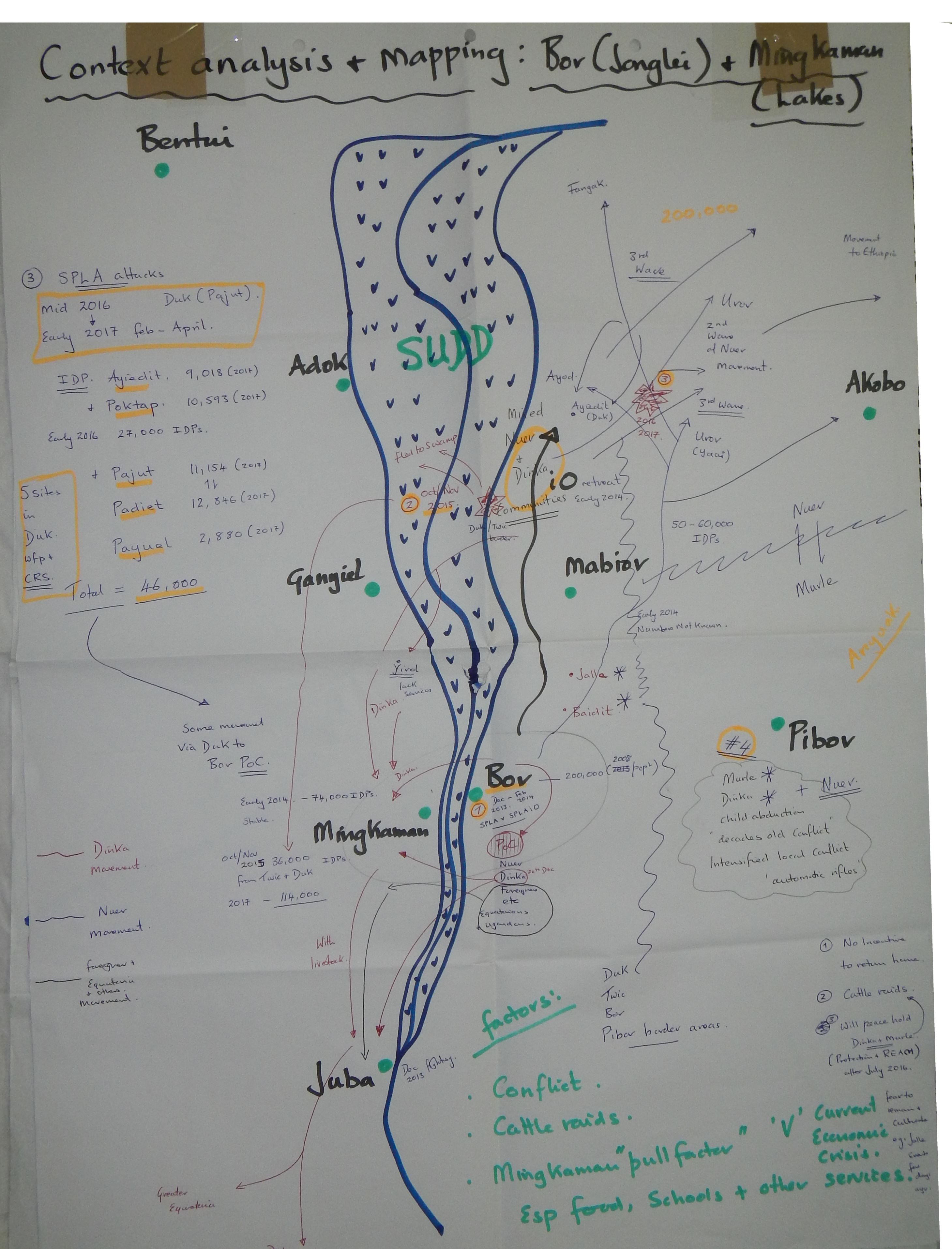 This map was circulated in the FSL cluster coordinator mission report to Bor (Jonglei): 17 – 19th July 2017. 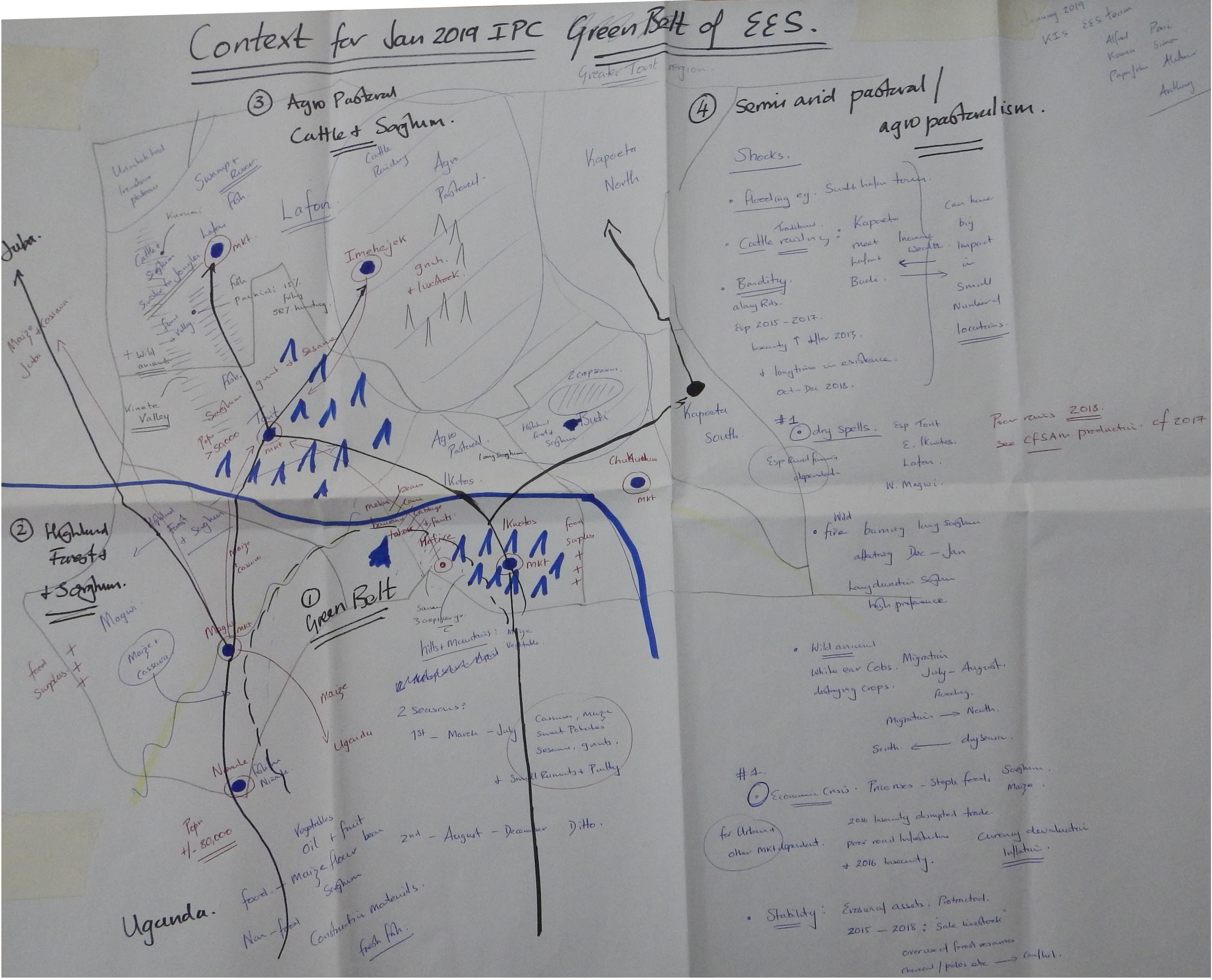 This map was drawn in Eastern Equatoria as part of the January IPC analysis. 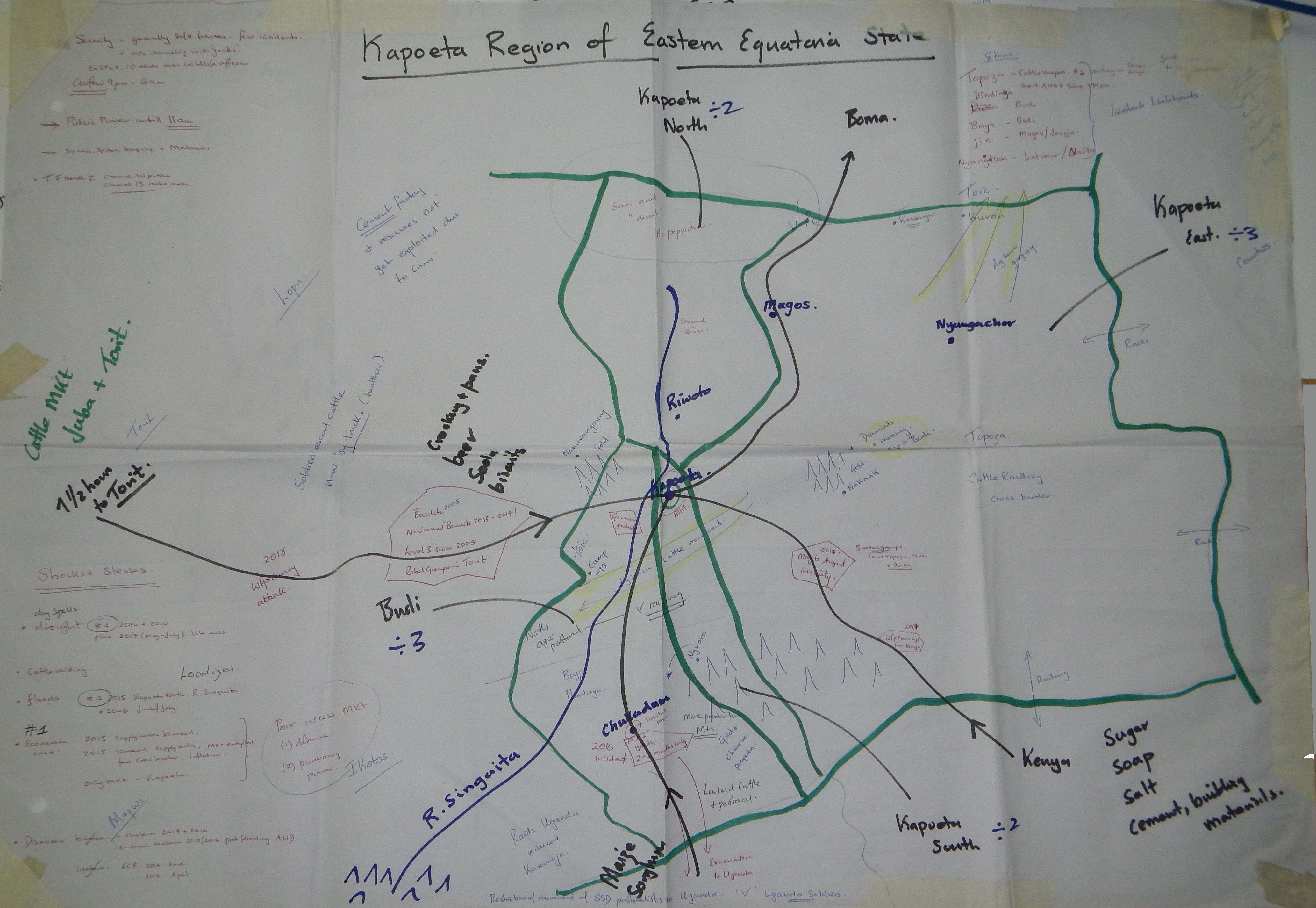 "Trade routes: Kapoeta town is the main, even sole, market in the region: transport hub with traders from neighbouring countries; The primary export remains livestock via cattle markets in Torit and Juba; historically escorted on foot by SPLA troops offering security; but more commonly now by truck: animals reach in better condition and attract higher producer prices; Significant mining of gold in mountains around Namuvanyoung, Naknak and Nguroro (with known Chinese investment & prospectors) and paid employment for some local residents; and mercury and diamonds being extracted in Budi; but no discernible infrastructure investment to the region. The volume of exports and earning is not locally known. Additionally there are known cement reserves in the region; possibly due to the national crisis there has not been an investment in the proposed cement factory until now..." 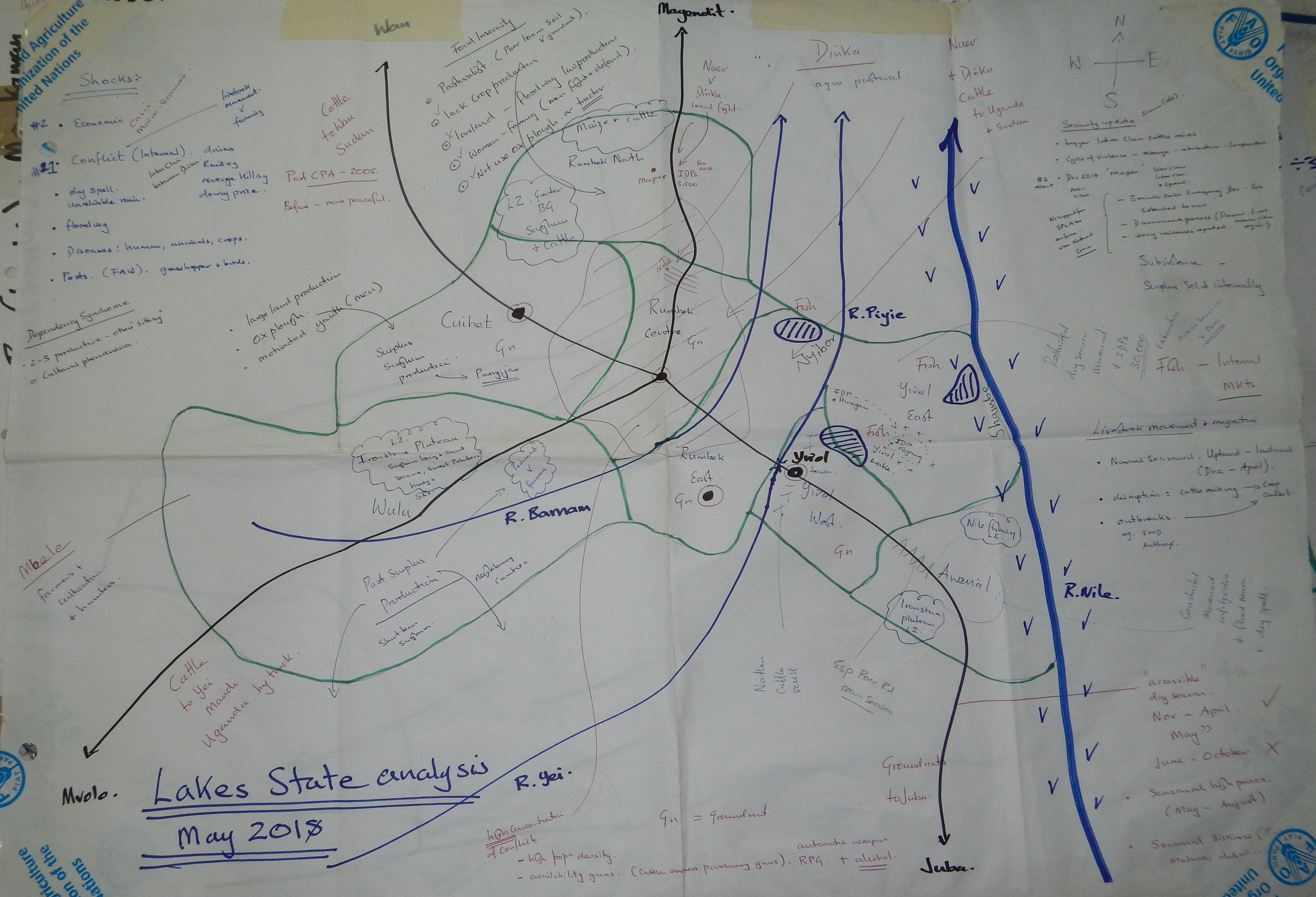 This map was circulated in the FSL cluster coordinator mission report to Rumbek (former Lakes state) 29th May – 1st June 2018.

"Major trade routes & commodities: Nuer & Dinka cattle from Unity and Lakes to Sudan via Wau; and to Yei & Maridi (by truck) onto Uganda; reduced trade for now due to the crisis; Production of surplus groundnuts for export from Cueibet, Rumbek Centre, Rumbek East & Yirol West to Juba; Fish from the Sudd/ RNile, R.Barman, R.Yei/ R. Piyie; and the three lakes: Nyibor, Shambe and Yirol for internal and external market; Main constraint is the lack of road access during the rain season (May – October); the consequent high price of commodities during May – August pre harvest lean season; and the seasonal morbidity & even mortality due to malaria (rains) and cholera & diarrhoea (more associated with dry season but also rain season peaks) ..." 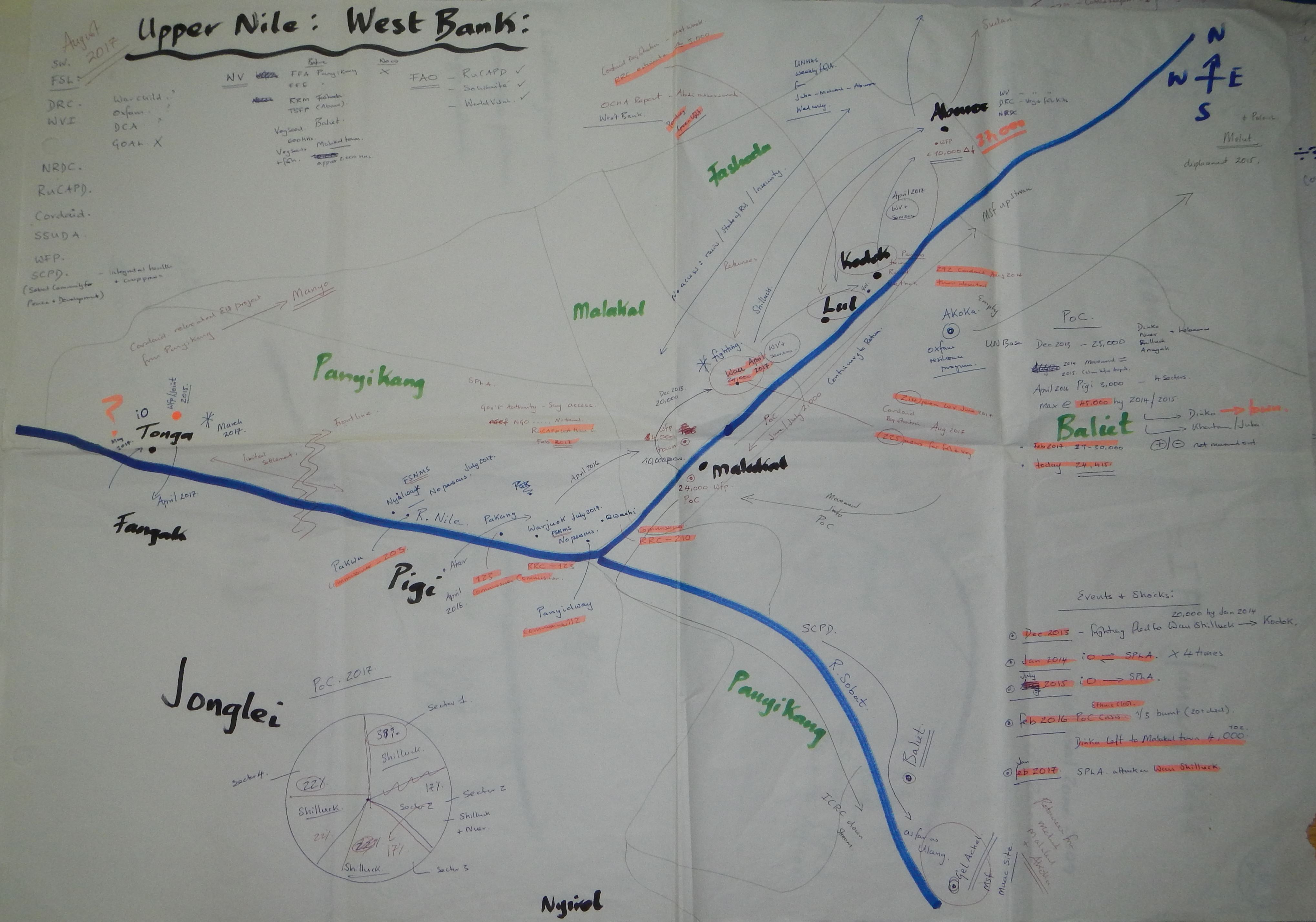 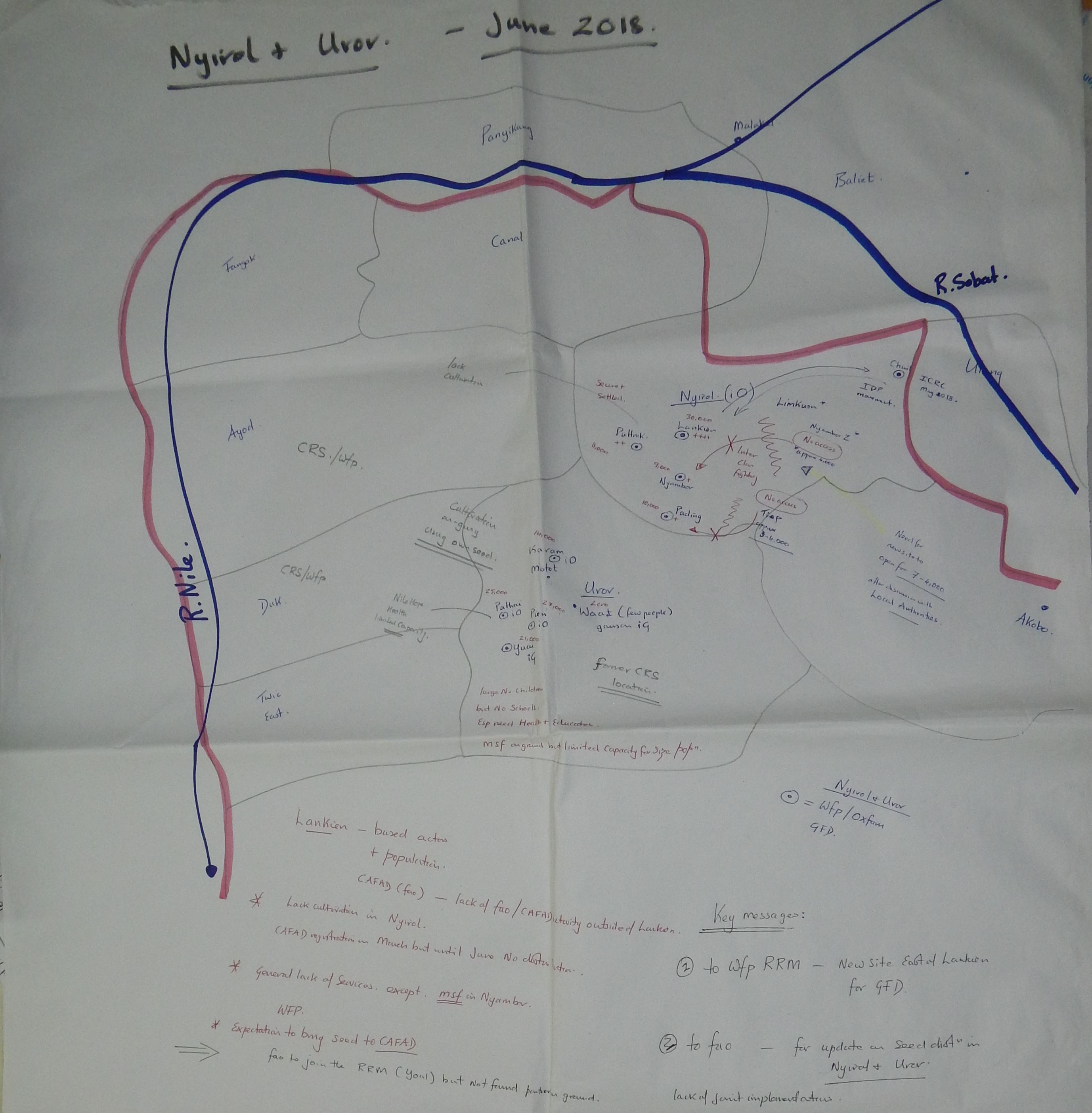 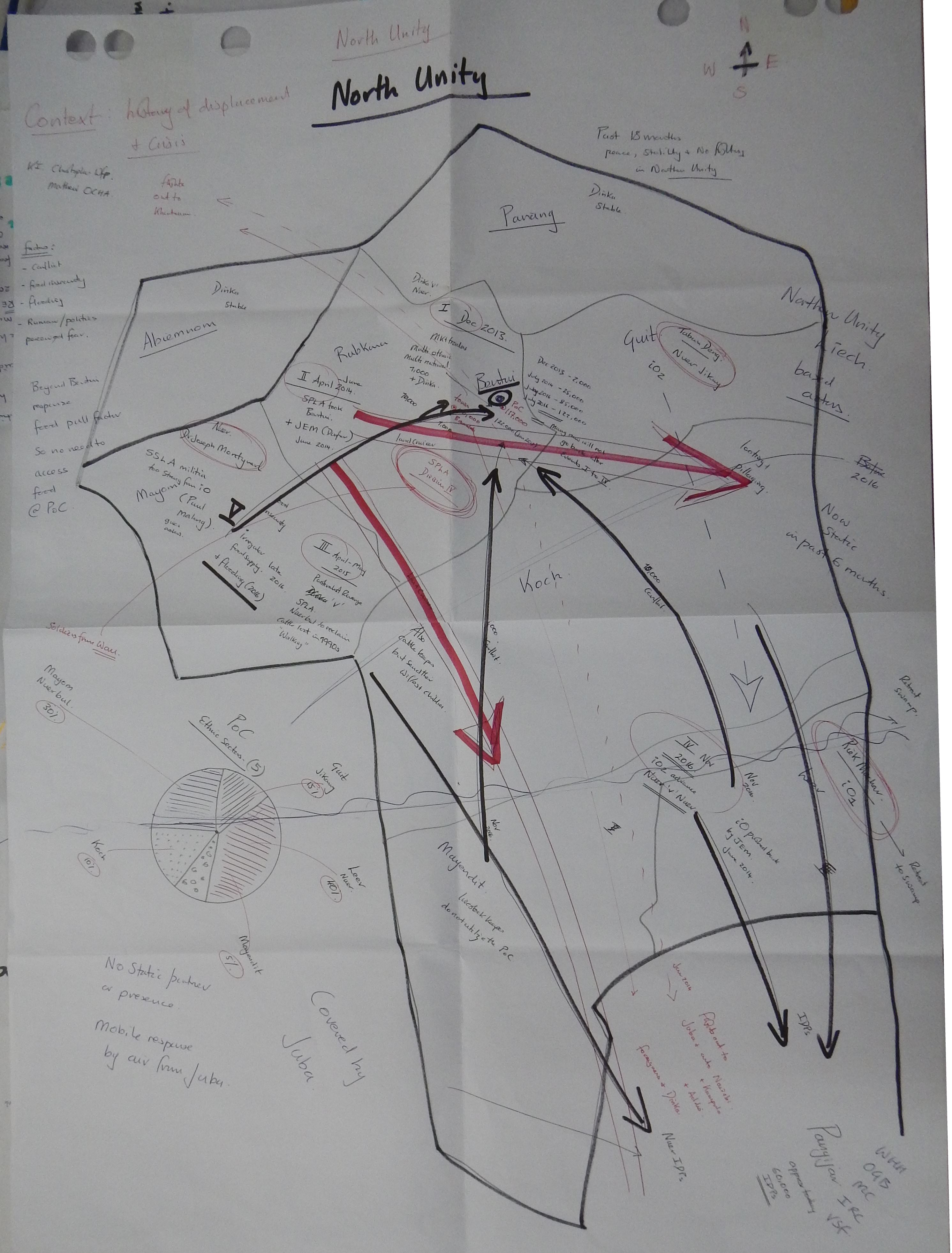 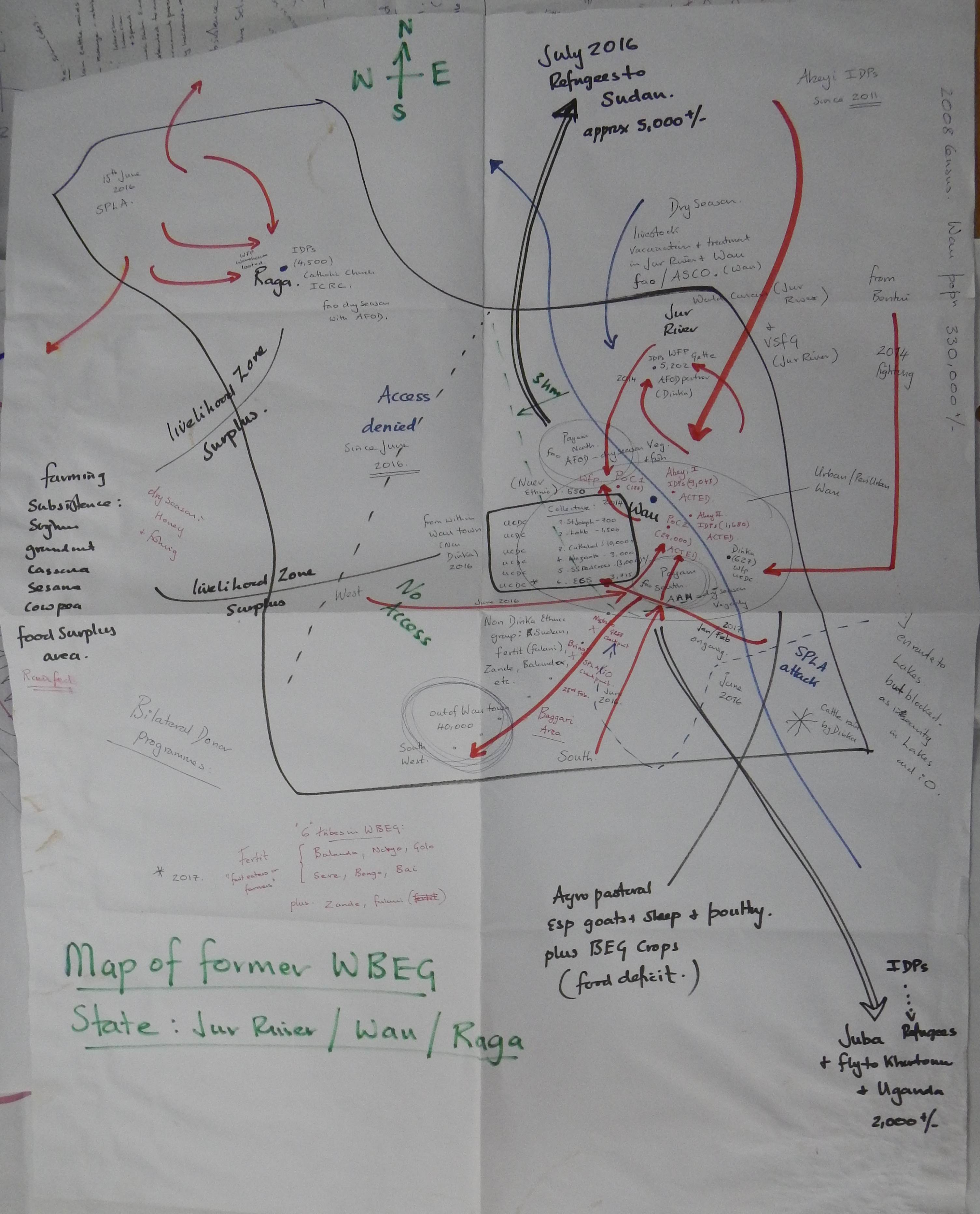